Carbon Steel: The Kitchen Investment of a Lifetime 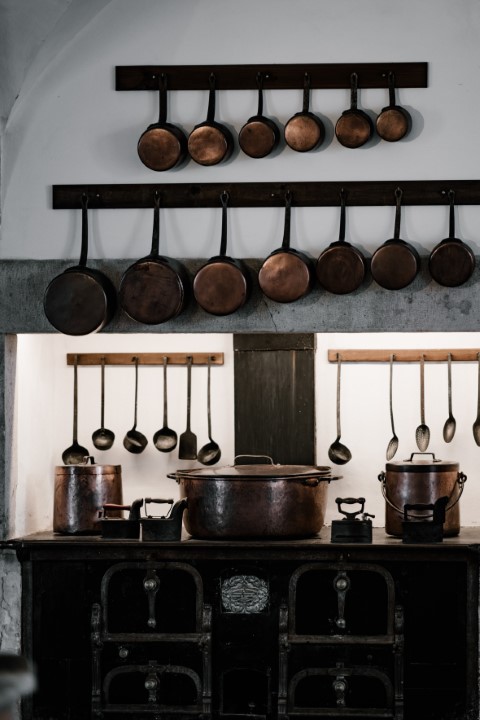 If you’re trying to decide on cookware to invest in, look no further than carbon steel: It’s the cookware every top chef prefers, including famous American cook Julia Child. With its multipurpose functionality, one pan can easily replace most of the rest of your current set. Why clutter your cabinets with cheap alternatives when one excellent pan can do it all? Carbon steel is the one pan that can do it all.

An Introduction to Carbon Steel

Although the difference between cast iron and carbon steel isn’t major, professional chefs prefer carbon steel due to its ability to withstand high heat including temperatures that exceed those on your home stovetop. Although aluminum and stainless steel pans heat food quickly, they do not perform nearly as well at high temperatures. Not only do carbon steel pans withstand the high temperatures of industrial kitchen stoves, they heat up faster than their cast iron counterparts. They can also keep food piping hot in the pan when you’re fixing up those side dishes and completing other kitchen duties.

In addition, carbon steel pans are more lightweight and hard-wearing and heat up faster and more evenly than cast iron. They’re also easier to maneuver and are more durable than stainless steel, copper, and nonstick pans. Although they’re not as effective as stainless steel at retaining heat off the burner, they do maintain consistent heat while you’re cooking and can withstand temps up to 1200 F. 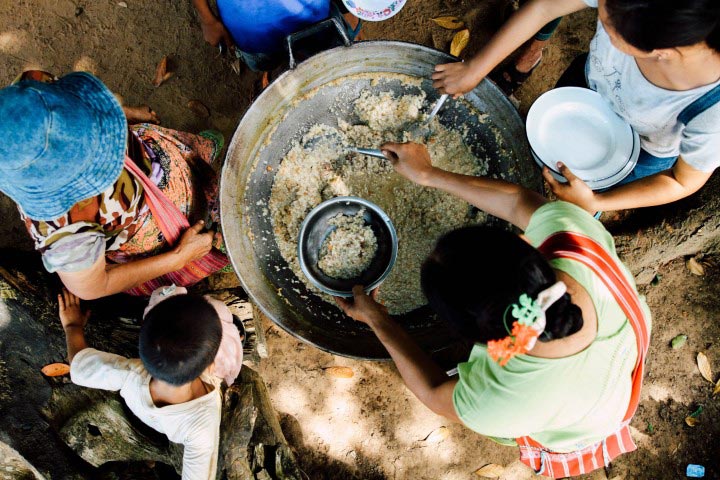 To maintain their high performance, you will need to season your carbon steel cookware to ensure it continues to be nonstick, but compared with cast iron which may need multiple seasonings, you’ll have to do it just once. Carbon steel pans are easily cleaned with water and a sponge or a soft bristle brush and can be dried by briefly putting them back on a slow burner. Just don’t put them in the dishwasher as they can rust, and avoid cooking acidic foods such as tomatoes or citrus as they can degrade the finish.

If maintained properly, carbon steel will last forever and will age gracefully. You don’t have to worry about using metal utensils as any scratches are cured with re-seasoning.

The biggest downside to carbon steel is that it should never go into the dishwasher, but as long as you perform basic maintenance, your pan will last a lifetime in contrast to more conventional, popular cookware that you’d otherwise have to invest in year after year.

Both carbon steel and cast iron pans compare to aluminum alloys are also relatively poor conductors of heat and consequently more prone to uneven heating patterns. They may be hot in the middle right over the burner but cold around the unheated perimeter. They’re also reactive metals that do not tolerate acidic or alkaline ingredients well.

When looking for carbon steel pans, you’ll come across both blue and black steel varieties. The colors allude to the surface-hardening treatments designed to prevent rust that make the surface of a new pan look either blue or black as opposed to silver.

Black carbon steel, in particular, has a black color that comes from black iron oxide. It is relatively stable and less prone to corrosion—making them essentially invincible. Compare to carbon steel that require bluing to form protective layer, black carbon steel pans could be seasoned straight away and used for cooking. Black iron oxide layer is sensitive to acidic food and can wear off if not seasoned properly. 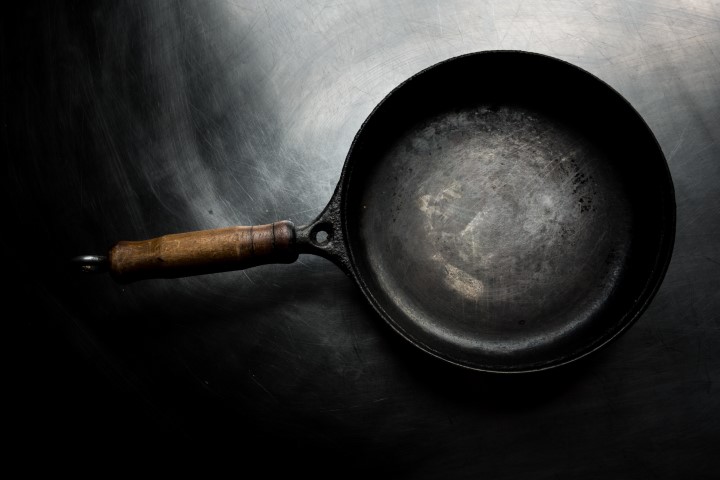 As mentioned previously, there’s not much difference between carbon steel and cast iron in terms of retaining heat and durability. They both need proper seasoning to maintain their nonstick qualities, and both can go from the stovetop straight into the oven. Carbon steel is composed of 99 percent iron and 1 percent other minerals including carbon, whereas cast iron contains 2 to 4 percent other minerals including carbon and 96 to 98 percent iron.

There are, however, minor differences. Carbon steel pans is more appealing as it’s made from sheets of metal which gives it a smoother surface that actually may be more nonstick than a seasoned cast iron pan.
Differences in design also make each more suitable for different dishes. For instance, cast iron skillets have vertical sides that are better for cooking chicken, cornbread or pizza while carbon steel pans have sloping sides that are better for sautéing. Because cast iron skillets are also thicker and heavier, they can heat food a bit more evenly than carbon steel, it’s also easier to sear meats in them. Carbon steel pans have sloped sides, making them more equipped for sautéing. Carbon steel, on the other hand, is lighter, so it’s easier to lift when tossing ingredients.

The grain structure, which determines how a pan performs and how it can be molded, is also a diverging factor between the two. The extra carbon in cast iron makes it more brittle as carbon tends to lump into carbides—a mixture of iron and carbon—or to form flat sheets of graphite (pure carbon) that disrupt the grain of the iron and make it more irregular, brittle, and weak. In comparison, with less carbon in their makeup, carbon steel pans have a uniform grain structure that makes the metal stronger and the pans lighter and more maneuverable. Carbon steel is pressed from raw, heavy-gauge steel and is extremely durable. Unfortunately, it rusts easily. Even ambient moisture in the air can cause rust in just a few minutes - which is why investing in a black carbon steel pan may be more pragmatic.

If you already own cast iron cookware, investing in carbon steel might be unnecessary; if you’re deliberating between the two, you’ll find both are affordable. Online prices can range quite a bit, but it’s best to avoid the cheapest ones as they could be made of excessively thin material.

However, nonstick and stainless steel cookware offer their own advantages—and drawbacks. 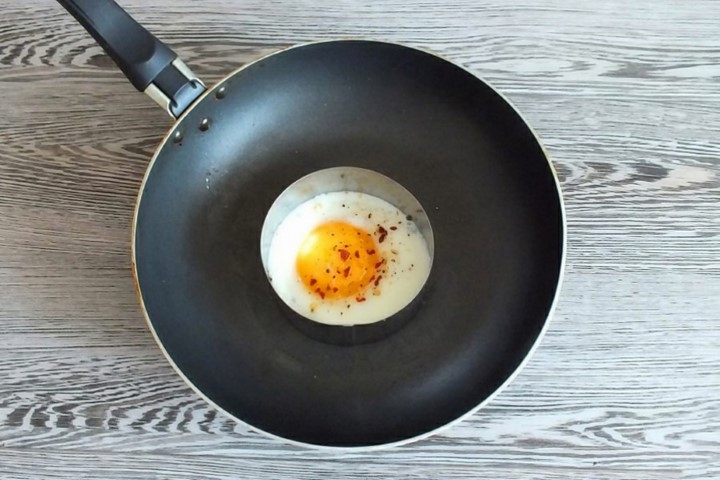 While nonstick frying pans have good heat conductivity, they should never be heated above medium as the coating can overheat. which means they can be just half as hot as a carbon steel pan can be. Lower quality nonstick pans are also much less durable and should not be stacked under other pans or used with metal utensils as the coating can easily be damaged. They are, however, easy to care for and don’t have the reactivity problem of carbon steel or cast iron pans. 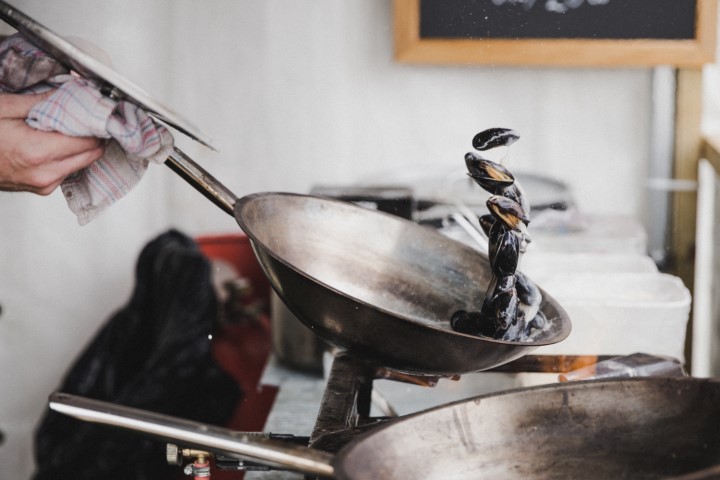 Stainless steel cookware is poor heat conductor, especially compared with aluminum cookware. Stainless steel pans are much lighter than cast iron and carbon steel pans, they don’t react to acidic foods, and they’re relatively easy to clean and will never rust, but their nonstick abilities are limited.

Overall, carbon steel cookware will provide you with the most bang for your buck. With their unparalleled ability to withstand heat and their sophisticated, lightweight, structure, carbon steel is not only a worthy investment, but one that you’ll be able to hang on your rack for a lifetime. Take a cue from the industrial kitchens of professional chefs and invest in yours today.

How to clean a new WOK

Follow this guide and avoid the most common problems as grey/black residue after several cycles of washing. All process will take 5 minutes only!

How to season a WOK (basic oil method)

In this video, we offer a simple and easy way. Exclusively, enjoy the thermal view of the process. Repeat it a few more times if you want to get a thicker patina and make it non-stick.

What to do with burnt-on food stuck to the surface

Cooking on high-heat is challenging, but burnt food stuck to the surface is normal. Watch the video and cook on high heat without worries.

Wok and egg test - failed or passed? Watch the video and try with your carbon steel wok or pan.